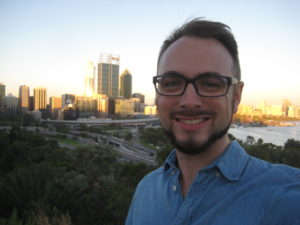 I was born in Grand Rapids, Michigan, USA, a.k.a. the beer capital of America! Growing up there was fun, especially when “snow days” happened. Don’t know what a “snow day” is? It’s when so much snow is on the ground that it’s unsafe for school buses to drive, so school gets cancelled for the day! Are you jealous yet Australia?

When I was growing up, my family lived near Rockford, a town north of Grand Rapids. Our house was far enough away from the city that many stars and the Milky Way were easily visible on clear nights. This definitely set the stage for my fascination in the universe.

I enjoyed learning about the universe so much that I decided to study physics at uni. I went to Calvin College, also in Grand Rapids, and that was a great experience. One of the funniest moments of my life occurred while I was at Calvin. A group of us physics students were chatting in the physics reading room about how group behaviour is totally different to individual behaviour. One guy summed up the discussion with, “None of us is as dumb as all of us.” Another physics student, who had just walked into the room and heard the latter statement, asked, “Is that Latin?” Needless to say, I was rolling on the floor! The one thing I regret about my Calvin experience was failing to research the motto of the men’s dorm wing I signed up to stay in during my sophomore (2nd) year: “Nudity is community.” Needless to say, I didn’t spend much time in my dorm room. I did, however, spend a lot of time at the observatory, checking out the universe I was so fascinated with, and that was a lot of fun!

After I graduated, I had the opportunity to do a Master of Engineering in Sustainable Energy at the Royal Melbourne Institute of Technology (RMIT) in Melbourne, Australia! I decided I couldn’t pass that opportunity up, so I took it! Off I went to the land down under!

Around then, I met a beautiful Australian woman named Jess. I fell in love with her, and in 2011 Jess and I got married! It was the happiest day of my life! Most of my family, including my grandparents, were able to come out for our wedding, which was a real blessing.

A few months after we got married, I finished my Master’s, and so it was time to look for work. I applied and applied for jobs, but no doors opened for me. So I thought, “There’s always astrophysics!” While Jess and I were travelling on a big trip to Europe and the US, I received news that I was accepted at the University of Western Australia in Perth, so I said yes! Yes, I will study supermassive black holes at the centres of galaxies so we can better understand the role that their energy generation has played in galaxy evolution throughout the history of the universe!

I’m now 2.5 years into my PhD and I’ve got about a year left. It’s been a remarkable journey, but I’m looking forward to finishing! I’ve been in Australia for a total of about eight years (as of February 2017). I’m a permanent resident and hope to become a citizen within the next year or so! I’ve learned most of the lingo and the slang, but every now and then I find myself saying to someone in a conversation, “What was that?” Always makes life interesting! I love Australia and I feel very much at home here, especially with all the great beaches (psst, Western Australia has the best)! I definitely don’t plan on leaving anytime soon, especially if Jess is here!